Here is something I never thought I would hear.  Willie Nelson is giving up smoking pot. I kid you not… the famous pot smoker and weed advocate says it’s taken a toll on his lungs and health. Willie said he’s not done with THC… he’s just done with smoking it. Onto edibles now… where are the brownies?

Looking for a little holiday fun with a drink or two? A pop-up bar has opened in Northeast Philadelphia called The Grinch’s Garage. The holiday bar features themed drinks like a Grinch cocktail with Midori and lemon lime soda, an Eggnog White Russian and a Moscow Mule. Grinches Garage is located at Tioga and Melvale in Port Richmond. 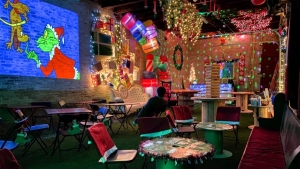 Speaking of Philly, 102 year-old Allen Tripp and 88 year-old Marvin Weisbord recently recorded their first album together. The two live in a Pennsylvania retirement community in Bryn Mawr and say their album, is called ”Senior Songbook”. The CDs have already sold out, but you can stream it on Spotify.

The other day Joel comes to me and tells me that a whole bunch of his buddies want him to move into a house with them… to be roommates! They all split expenses… piece of cake! Good idea or bad idea?  There is nothing wrong with that, unless of course you have had some bad…

Well the apologies are still coming out after a couple of mispronunciations during the Grammies. Yesterday we told you about comedian Jim Gaffigan’s flub when he butchered Camila Cabello’s name. Yesterday Sharon and Kelly Osborne hit social media apologizing for how they mispronounced “DJ Khalid”. Hey, it happens! If you are planning to order in…

Hey Rick & Joel… My sister recently sold her house and will be renting again for the first time in at least a decade. She’s already been looking at apartments and told me how shocked she was at all the personal information she had to disclose just to fill out an application. I told her……

Wendy Williams… who you know I have no lost love for… is at the center of what is being called FARTGATE! A few days ago she was accused of passing gas during a “Hot Topics” segment. Yesterday, she finally weighed in on the controversy. Wendy insisted that she didn’t do it. She even went as…