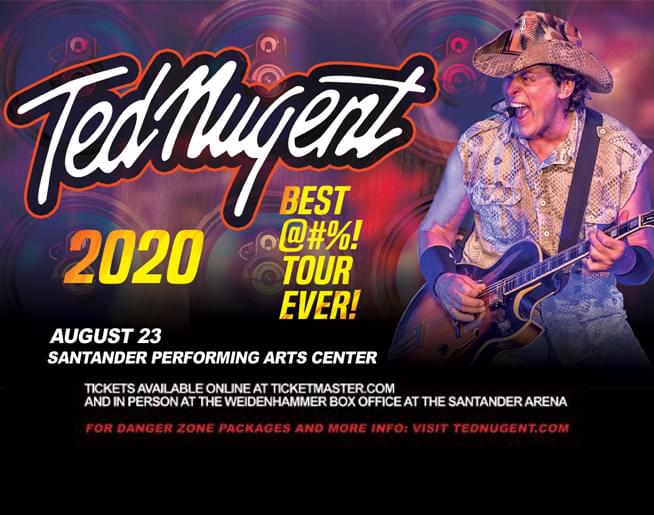 Select few professionals are possessed of the skill, passion and sheer tenacity to break record after record in their chosen field.  And fewer still can stake that claim in more than one arena.

To millions of music lovers, Ted Nugent has carved a permanent place in rock and roll history as the guitar-shredding showman, selling more than 40 million albums, performing more than 6,400 (!) high-octane concerts, and continuing to set attendance records at venues around the globe.

From the ground breaking Amboy Dukes’ hit “Journey to the Center of the Mind”, to classics like “Stranglehold” and “Cat Scratch Fever”, Damn Yankees chartbuster “High Enough,” and cult classic “Fred Bear”, Ted’s no-holds barred career spans five decades, and has been featured on A&E’s Biography and on VH1’s Behind the Music. Named Detroit’s greatest guitar player of all time by readers of MLive!, Nugent performed for 55,000 marines, sailors and families at Camp Pendleton’s Rockin’ the Corps, was honored to join fellow musician Toby Keith on a USO Tour of the Persian Gulf, and has donated in excess of 6000 concerts and backstage passes to individual troops stateside.

To millions of citizens, Nugent is the nation’s most outspoken proponent of our first and second Amendment rights, conducting thousands of pro-gun, pro-freedom, pro-America interviews in major media worldwide.  He has served continuously on the Board of Directors of the NRA since his initial election in 1995, where he consistently sets records for amassing the highest number of votes received by an individual board member. Read More…

After hearing Joel gloat about Ancesty.com for WEEKS, Rick finally decided to sign up and do some digging! Are Rick and Joel distantly related? That’s a scary thought! Who’s that hunk???? Posted by The Hawk Morning Show with Rick Michaels on Tuesday, 11 August 2020

Less than a month ago Joel decided to sign up for Ancestry.com to track his family tree. He dug even deeper and took a DNA test… Rick has the results this morning!

The top trending video of the week is of Jason Derulo jokingly hitting Will Smith in the chops with a golf club at a golf virtual practice center. Many thought it really happened but thanks to special effects, Will and the team created some missing front teeth for the incident. Check it out… Simon Cowell’s…

SPOILER ALERT!!!!! Is it me or has Shark Week actually jumped the shark? All week the big hype was Mike Tyson going head to head in an underwater bout with a killer shark. In all actuality it wasn’t that at all. First, the best part of the whole segment was before Tyson even entered the…